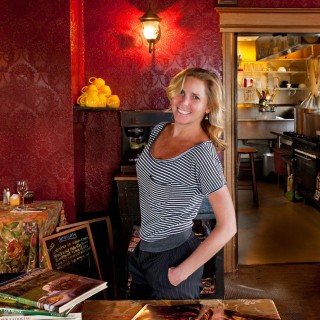 On Thursday October 25, 2012, Governor Chris Christie told the people of the Jersey Shore to evacuate. Superstorm Sandy was on her way.

I’ve been through hurricanes before, and like many people, I didn’t buy into the “Frankenstorm” hype. It wasn’t until I saw the ticker from NOAA at the bottom of my TV screen that I got nervous. NOAA people aren’t smiling into the camera as they talk tragedy. These people are scientists. They know what they’re talking about and they didn’t say Superstorm Sandy was coming to the East Coast–they named our towns specifically.

At approximately 3 pm on Sunday October 28, the ocean met the lake, the inlet breeched. The storm still had a few hours before landfall.

A house crashed into the Mantoloking Bridge.

The power went out. People hunkered down. The Jersey Shore was dark and silent but for the wind howling along the coastline.

On Monday morning, boardwalks floated a mile inland. Houses sat blocks from their foundations. A boat from the Belmar marina perched on a street sign three towns away.

Cliff drove up Highway 35 those first few days. He works for the power company.

“You don’t want to know.” The man doesn’t cry, but he was shaken up pretty bad.

For three weeks they worked 18 hour shifts, coming home to eat and shower. Over 2 million people were without power. An elderly couple approached his truck asking about the status in their neighborhood.

He couldn’t give them an answer because there were so many trees down and they had to wait until the tree guys came to remove them.

“Trace, she was shivering and there was nothing I could do.”

I thought about that poor old woman huddled with blankets next to her husband trying to stay warm. I nearly cried when I heard the pilot on our hot water heater kick on and thanked God we have a gas stove.

Brian and Chris were at 10th Ave Burrito cooking for First Responders and anyone else who needed a hot meal. I couldn’t get to the restaurant because Highway 35 was flooded.

On Tuesday, I pulled into the driveway of my restaurant, anticipating the worst. I was lucky.

I called Borough Hall and asked what they needed.

“Coffee cups for the volunteers,” Tabitha said. “And Tracie?”

I wasn’t prepared for this. People stood in the cold rain charging their phones on 2×4’s set up with electrical jacks.

Those first days I drove from Toms River to Belmar, cooked, served, and prayed. The power wasn’t going to be restored anytime soon, so Mayor Matt Doherty set a curfew.

I stood in my kitchen and cried.

Too dark, too lonely. So cold.

The gas rations kept me from coming back to Belmar, so I went to the Silverton firehouse where 29 of their guys lost their homes in the Brick fires. They brought their families to the firehouse and went out to rescue more people.

Their wives worked around the clock feeding the hungry, the exhausted.

An EMT from Delaware put her backpack next to a cot and walked into the kitchen. “What can I do to help?” she asked.

In unison, we told her to go get some sleep.

A part of our world was ending. What could we do? Embrace one another and convince each other everything would be all right?

I watched the tired firefighters clamber on a truck. They hadn’t eaten since their last call.

A little boy stood in the doorway of the kitchen. He asked his Grandma what he could do to help. His grandmother dried her hands and pulled him close.

I handed him a basket of bread. “Why don’t you put this on the big table next to the plates?”

He smiled, happy to have something to do.

Grandma said “thank you” to me and a minute later, he was back.

We laughed, tears in our eyes.

No matter what happens in this country, we’ll survive because people are willing to pitch in. A woman lost her home. She chopped onions to disguise her tears. She’d reserve them for later when everyone else was safe. We pulled together the best part of ourselves and threw it into the pot.

On my way home, I stopped at the Elks in Toms River to have a beer. A truck arrived from Virginia. They needed volunteers. It was the night of the snowstorm.

I put a few chickens in a pot of water and peeled potatoes. Nancy chopped vegetables while Sue opened cans of tomatoes. People came in from the cold and we served Brunswick stew. It wasn’t much, but it tasted good.

An old woman took my hands in hers and thanked me. “Did you make the soup?” she asked.

She lost her house and was sleeping at her daughter’s house. They had come for extra sleeping bags and blankets. I handed her a lantern and a new pair of gloves.

“That’s the best bowl of soup I ever had,” she said.

When I cry, it’s not tears of sadness but of joy. Yes, it was a sad time. But we made it. We’ll always make it. We took the best parts of ourselves and gave them to others. Like in the fable Stone Soup. It takes a community for a feast.

I saw it firsthand.

We all did what we could, and it worked.

Clean whole chicken and put in a large stock pot with water enough to cover chicken (about a quart). Boil gently for about one hour or until chicken is cooked through and the meat falls off the bone. Strain, reserving liquid. When chicken is cool enough, pick the meat off the bones and put in pot with stock. Add the rest of the ingredients and stew for about 20 minutes. Serve hot with crusty French bread or a grilled cheese sandwich.

By tracieorsi in Cliff Notes, Ragin Cajun, recipes on October 30, 2013.
← What the Bleep is in my Pantry, I’m hungry! Let the Good Times Roll! →